I’m looking for something beyond the obvious as a suggestion. I have a VM that was running Windows 10 2004 and got upgraded fine through 20H2. It had a disk full problem at one time (plenty of space now) and the seemed to have screwed up Windows Update. I’ve run the troubleshooter numerous times, I’ve tried stopping the services, cleaning the old WU files and cert, and restarting the services. I’ve tried stopping all services and then running setup.exe from the 21H1 ISO. Running Windows update produces a 0x80004005 error: 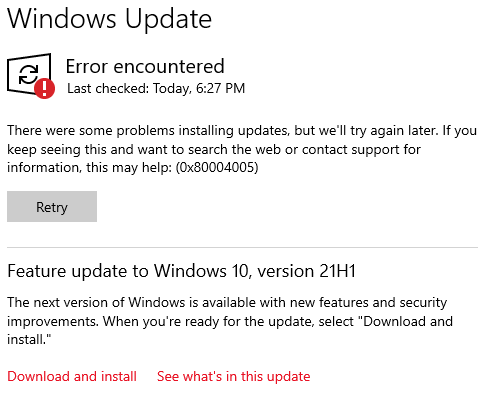 Running setup.exe from the ISO generates this helpful dialog:

These are attempted updates. I haven’t tried “Reset” yet because I would prefer not to have to lose my apps/config of them.

Looking in the Reliability Monitor I see stuff like this: 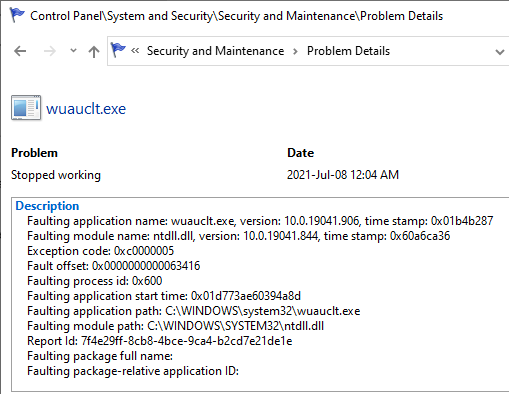 Other than failing to update, the virtual PC operates great. Anyway, I’m open to any suggestions…

Maybe you already tried but I find it helpful to download the Windows 10 Updater from the microsft website when I encounter unexplained issues. It seems to have an easier time bypassing those issues as is basicly does an in place reinstall with the current version.

You said that you ran out of disk space at one point, but now it is okay. How much free space do you currently have?

Yup, I’ve tried it. That is what produced the “Windows 10 installation has failed.” dialog box.

How much free space do you currently have?

Okay, that should be enough. I know people who are “cautious” with VM disk space and might have added 2 - 3GB

Edit: It looks like DISM isn’t finding the files. Have your tries using the “-source d:\sources” or wherever your install is located / ISO is mounted?

I do (well did, am in the process of killing it now) have a $WINDOWS.~BT hidden folder, and I found some logfile that had errors with the text “spoofed” referencing this folder. I usually use the Disk Cleanup tool, but it didn’t touch it. What a pain to manually clean it out.

It seems to me that with the different methods tried and achieving the same result my conclusion is that something in windows still thinks there is not enough space and keeps erroring out because of it.

Not sure what you would do to fix this issue but I had a very similar issue with a PC that I used to record security cameras. After the hard drive ran out of space with recorded video I freed up space on it by deleting old footage but the PC stopped updating after that, it would constantly run into issues by either plain erroring out or by actually trying to install the update but just before it would finish it would have an error and revert the update.

I tried multiple things to fix it and could never find a solution other than wiping and reinstalling Windows 10.

actually trying to install the update but just before it would finish it would have an error and revert the update.

Yes this is exactly the sort of thing I am experiencing.

I tried multiple things to fix it and could never find a solution other than wiping and reinstalling Windows 10.

Yes I am fast verging on this “solution” despite wishing to have some other approach.

Yeah I know I didn’t like it either. Afterwards though everything worked fine. I also installed a secondary HDD to store stuff on leaving the OS drive with only the OS and I have not ran into this issue again.

It looks like DISM isn’t finding the files. Have your tries using the “-source d:\sources” or wherever your install is located / ISO is mounted?

I would need help with this. As this version seems to be “half and half” being upgraded by Windows Update (that seemingly isn’t complete) I don’t have an ISO that matches this version, so far as I know. I do have ISO files for Windows 10 20H2 and Windows 10 21H1, but no experience with what it would take to extract them.

You don’t need to extract them, just mount the ISO (double click the ISO and it will appear as a virtual DVD), then you just need to point DISM’s source parameter at the install directory on the ISO image.

Unfortunately, I’m on my work PC at home, all ISOs I can look at are on the office NAS and will take a couple of hours to mount… I’ll see if I can look at it later on my private PC and local ISO.

and it failed similarly…

Remove the .wim bit, just use the sources. You need to specify the directory, not individual files.

You need to specify the directory

Well I don’t know how they could make this process any more difficult… it just fails, not matter what:

Have to ask what you might think a basic question. Have you tried uninstalling all updates back to 20H2, and then running update? Since it is a VM, I would duplicate the VM before doing this.

tried uninstalling all updates back to 20H2

Because it was once low on disk space, I used the Disk Cleanup tool to clean up Windows Update. (I think this may have caused the problem to be honest… I may have run it while updates were also downloading.) So I don’t assume the system has the necessary info to roll back… but I should go check.

I would make a backup copy of the VM, then a screen save and printout of the “installed update” list, then working back, uninstall every one sequentially back to 20H2. And then run Update. And not do anything else on the VM while doing it. Painful, annoying, and frustrating, but it might work.

uninstall every one sequentially back to 20H2

Most of the ones listed don’t have an option to uninstall them. I uninstalled the youngest one that will allow me to uninstall it (which kind of relates to the timeframe of the problem developing) which is, of all things, the microcode update. (I would expect it to be doing mostly nothing, but perhaps VirtualBox is confused by it.) We shall see if that makes any difference.

Is your problem the same as one posted about a month ago and you responded to?

Hard to know for sure. I’ve tried uninstalling what I could… and so far it’s made no difference. I think I’m going to be stuck reinstalling the VM… I will wait and see if a new version of VirtualBox (presumably out soon, as they seem to release every 3 months, and so are due) will make any difference (maybe it’s some sort of virtual hardware hitch.)