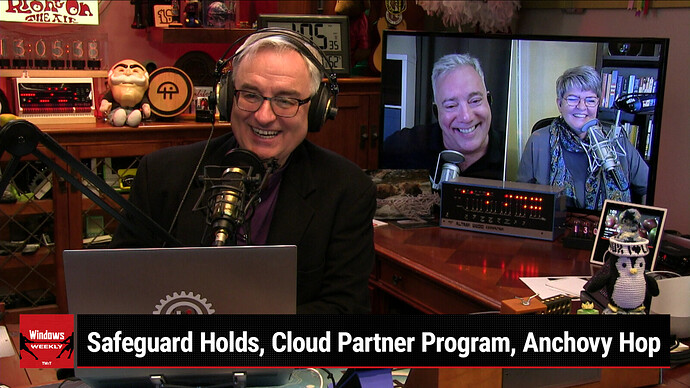 Windows 11 2022 Update issues, Industry Clouds, Stadia's best featureWindows 11 22H2 Deployment DramaMicrosoft says that it is speeding up the delivery of 22H2But why can’t you get…

I ran that FU script on my laptop and I have 21 feature update block entries.

The ‘Secure Launch data not migrated’ one is there, plus Chromium (Edge I assume), Microsoft Office, Incompatible Shell Extensions, VC Runtime and loads more I don’t understand.

If these things are a mix of MS, OEM and third-party issues that need sorting with updates, 22H2 is going to take months (years?) to roll out.

I just wanted to say, I found that both Leo and Mary Jo were having issues with Sleep Mode.

I am still on Windows 10, but in the past month or two, I have noticed an issue I never had before with sleep.

I run a dual boot set up, and on a full boot, I get the GRUB menu to pick Linux or Windows.

Before when I just close the lid in Windows (sleep) it would pop back into Windows when I opened the lid.

More recently, its like its fresh booting, because I have to pick from the GRUB menu every time.

Its incredibly irritating and inconvenient.

More recently, its like its fresh booting, because I have to pick from the GRUB menu every time.

Windows has three (or more?) levels of sleep.

Each level uses less and less (until none) power, which can be important for your laptop battery. Additionally, it might tie the transition between levels to the battery level, so that it “panics” once the battery appears to get low enough, and writes out and shuts down.

There should be some configuration settings you could play with, limiting the use of hibernation at all, if you want to alter the behaviour of your system and its attempts at battery level preservation.

If you’re comfortable on the command line, you can probably learn more by using the POWERCFG.EXE command:

One of its options is a “study” (i.e. a report). I don’t have a laptop, so I don’t know what it will produce, but you should investigate your system to see if you can better understand what’s happening.

Yeah, I probably need to mess with it a bit deeper. I did try adjusting the power settings in the control panel menu, trying Hibernate versus Sleep, etc. and it didn’t seem to make a difference. I’ll try the shell commands to see if I can get to a better root of what changes or what it’s doing.