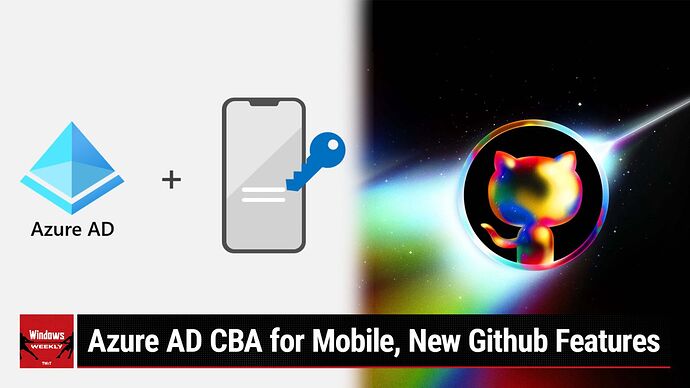 'Hey, Github!' voice coding, KB5019980 update, Control Freak Windows 11Why Windows 11 usage is down so low and what Microsoft could do to fix thatMicrosoft ships the “November upda…

I just knew this would be the show title.

The tangents you guys go off on are just so entertaining and filled with adorable, little, creative thought experiments. Like intellectual HDR: the deep blacks of Microsoft reality and the almost blinding flashes of sarcasm and goofiness. Mary Jo on the team was great, but this show felt like you guys switched traction control off, shifted from third to second, and stepped on the pedal.

I’m getting the same frustrating small changes in the Win 11 UI that Paul is seeing.

The search button on my taskbar was like @Leo 's yesterday. Just a magnifying glass, mouse-over it and it gives you a list of recent searches.

Today it’s like Paul’s, has the text ‘Search’ on it with no mouse-over functionality.

And my last update was 12th Nov - so this change hasn’t been delivered via Windows Update.

Now that’s really weird. Like a ticking time bomb in your PC!

You spend a lot of time talking about releases and updates to Windows 11, when that version consists of only minor cosmetic changes to Windows 10 and no new features that interests or impact anyone. Add to that that only a small percentage of users have gotten Windows 11.

The Windows OS has been stable since Windows 10 and just works. Given the lack of any new features, why would anyone want to update to version 11? It looks like a ploy to force people to buy new hardware.

You’re wasting too much time talking about version 11. If it offered any new capabilities, that would be different.

It’s a Windows show. It contains content about the current version of Windows and future versions of Windows. Windows 10 is NOT the future of Windows, whether that makes you happy or not.

I never said Windows 10 was the future of Windows. The future of Windows is a gradual decline into history, as enterprises replace Windows apps with cloud solutions and thin clients. Windows will one day be spoken of as COBOL is today. Still used in the odd legacy application, but not much more. That day may come sooner than you think.