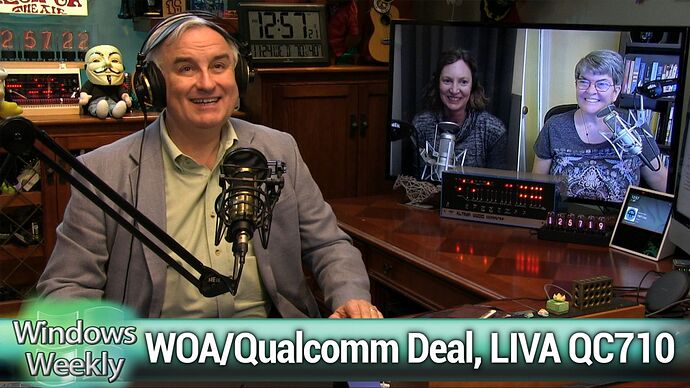 Windows on ARM, WOA mini-PC, Xbox Black Friday Does Windows on Arm have a future? About Microsoft’s Alleged WOA Exclusivity Deal with Qualcomm Hands-On with the Snapdragon WOA Mini…

— Intel won’t be figuring out M1 power consumption for 3+ years minimum. It’s not even close. Apple has been far more motivating to Intel than Microsoft, Qualcomm, and Samsung combined. Intel has hit massive record sales with 14nm—they don’t care about “the industry”. Should Intel do anything differently, according to their shareholders? 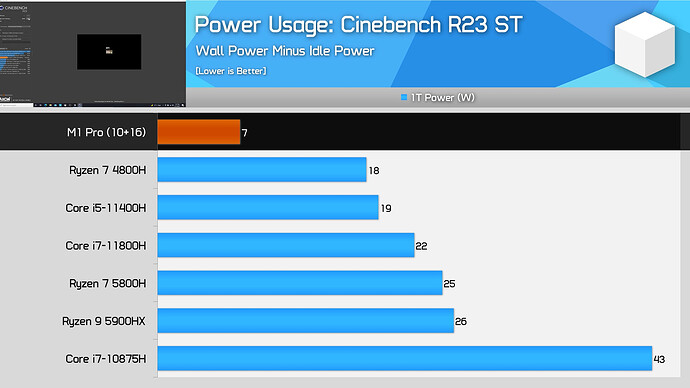 — The MBP 14” and 16” are hardly thicker. Did Paul measure that? Should re-check. The reason the M1 Pro / Max need active cooling is because they’re desktop replacements and beat many Intel & AMD desktop chips. They have HDMI ports—very few thin and light laptops have those. Different markets. 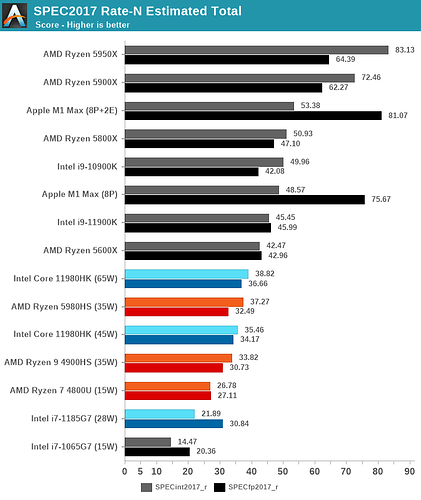 — Mediatek will have the fastest Arm laptop chips of 2021 and likely 2022. See the Kompanio series (nee MT8195)—Qualcomm was so slow, even Mediatek leapfrogged them. Not even close: A76 vs A78.

— AMD did try a few Arm chips and the now-canned K12, and so did Intel (“XScale”) from their DEC acquisition of StrongARM.

, eager to listen to the rest of the episode now.

It is also interesting to see side-by-side thermal shots of a MacBook Pro 16 from 2019 with the new MacBook Pro 16 2021 with M1 Pro processor. Sitting on an idling desktop, the Intel MBP has fans running and the whole thing glows bright orange, the M1 MBP is still blue/grey and the fans aren’t running.

I agree, Paul was a little disingenuous about the new MBPs being thicker, as you say, those extra ports just won’t fit on the thinner old design, and Mac pro users have been crying out for some of these ports to come back for years now.

I have a Rzyen 1700 desktop, it has active cooling, but the fans rarely spin up to an audible level (it was a bog-standard, relatively cheap, no-name system I bought on Amazon). Even playing GTA5 for a couple of hours didn’t trouble the cooling enough for it to ramp up the fans to an audible level.

Hammering benchmarks through it, and, yes, it becomes audible - usually the only thing you can hear is the physical disk spinning up and down every hour, when Windows syncs the SSD to a backup folder on the disk.

Can someone remind me of the markdown app that Leo recommended? I’ve been testing/looking at these for some time and hadn’t heard of it.

My current choice is Obsidian but I also like Joplin, Bear, Typora. It depends on what you’re looking for.

Sorry for coming at you so late with a tip, @Leo but if you roll up your sleeves, two open source, self-hosted options for collaborative markdown editing are Hedgedoc and Nextcloud. Although the latter is a full “private cloud suite” it does have a built-in markdown editor and allows collaboration like any cloud service.

I’ll be looking into Obsidian too. Thanks for the tip!

I have tried Joplin and Nextcolud. The one I am currently using is QOwnNotes which I like quite a bit. You can paste in images which get copied into a media folder and linked in the markdown. I got annoyed with Joplin because it randomly names all the files, and I insist on files being named intelligently so I can find them in the file system (including from the command line) without using the Joplin client. It seems (from memory, could be wrong) that pasted images were also embedded in the text file as base 64 or something, which I found cluttery. I prefer the images to be links to separate image files.

I really really like Nextcolud for a lot of reasons, but I have been finding the markdown handling a bit wonky especially on mobile. I’m hoping this improves because long-term, I would like to move to Nextcolud. I seem to recall that Nextcloud also did not handle images well.

Will check out Obsidian and Hedgedoc too, so thanks for those suggestions.

I have been using OneNote for many years and it really is the easy choice. I just don’t like proprietary file format and vendor lock-in (including vendor cloud lock-in). Been trying to move 100% off of OneNote for a while, but still stuck because its so easy and I have a lot of legacy. I’ll get there.

How in the world did I forget qownnotes!? I’m using it for my own notes!

I agree. OneNote was nice when I used it in the past. The thing about using a standard format like markdown is portability/interoperability. If you want to migrate to a different app in the future, it’s easy to take with you.

The only thing is that it is not collaboration-focused, but you could use other solutions for that: cloud sync, git, etc.

Agreed on OneNote - text file format is in my future. I especially like this for finding notes and copying text from the Linux command line because it requires no additional software.

Nextcloud solves the collaboration part pretty well and also has good search if you install the Elasticsearch plugin. It also supports commenting on files (and notification of changes by others), tags, version history, external sharing, and a new thing I just discovered called “Projects”. It basically allows you to link files and other Nextcloud objects under a project name, I guess sort of like a tagging functionality. The caveat here is that the metadata is stored within Nextcloud, so it’s not a 100% text solution. The alternative would be to embed links in the markdown itself.

One annoyance with using both a client like QOwnnotes and Nextcloud together is that the clients will want to make links to the file system (like /home/notes) and Nextcloud will want to make web links to a Nextcloud location (like https://yourNextcloudServer/nextcloud/index.php/f/46377) . I don’t really want my notes to have links that are dependent on Nextcloud metadata. Trouble is if you click a file system link in Nextcloud, it goes nowhere and file-system-linked images don’t display in Nextcloud.

Maybe Nextcloud could implement translation of local file system links. That shouldn’t be too hard (although could be dangerous, so would have to be done carefully).

I have to say, I have not dealt too much with qownnotes’ file linking system. In general, the strength of markdown is precisely that same headache: eventually you want some program just to keep track of the links. If you’ve ever used a markdown-based static site generator like Hugo, you quickly find out that keeping track of relative or absolute paths is a nightmare…

The best solution I’ve found for collaborative editing which is (1) based on an open format, (2) plain text, (3) is absolutely portable, and (4) takes care of the linking issue is Overleaf. But it’s a LaTeX product, and nobody is beating their chest demanding to use LaTeX…

Yeah, I’m really not interested in Nextcloud’s links in my files because if I ever had to blow away that installation and lost the metadata (or it got corrupted), my links would all get permanently broken. I’m insisting that my actual markdown notes files be independent of any client (because isn’t that the point?). The problem is that none of the relative links will render in Nextcloud or any mobile text viewer.

I gave Obsidian a quick try too. Looks good at first glance, but it puts pasted images in the root notes folder with an incomplete link. So Obsidian sees and renders it probably because it is hard-coded to look in the root folder, but because the link is incomplete other clients like QOwnNotes can’t find and render the image.