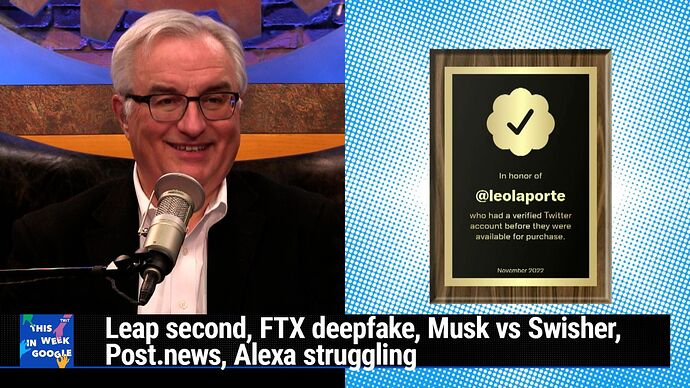 I Was the Head of Trust and Safety at Twitter.

That is a two edged sword, I post in English and German, for example, so if I moved to a German server, you wouldn’t see any of my posts…

That is true… but the servers I blocked are servers I had a good scrool through and they were all in non-roman script!

It went by pretty quickly but I noted that both Leo and Jeff appeared to be unimpressed by Kara Swisher. I must admit this came as a relief. Following various recommendations, mostly from Walt Mossberg, I have read Ms. Swisher’s articles and listened to her interviews and podcasts. The result has been a fair degree of bewilderment: why all the praise, what’s so special here? Not a major topic, just a small personal observation.

Starting to worry that Stacey isn’t coming back. She’s been absent for a lot of episodes, with less mention about why with each absence. I’ve always loved the “bigger picture” discussions on TWIG, but Stacey brought things down to earth, talking about new products having to do with the Internet of Things. And she would push to talk about, you know, Google, upon occasion. Hope I’m way off base.

She assures me that she loves doing the show. She’ll be back after next week - there have been lots of personal and professional obligations that have kept her from the show.

Meanwhile it has given us a chance to bring on some special guests.

But I totally agree her perspective and much valued and needed .