Microsoft announced that their Twitch TV clone Mixer is shutting down July 22, and I honestly had never visited it even once. I went tonight to see what it was like, and here was the front screen, LOL 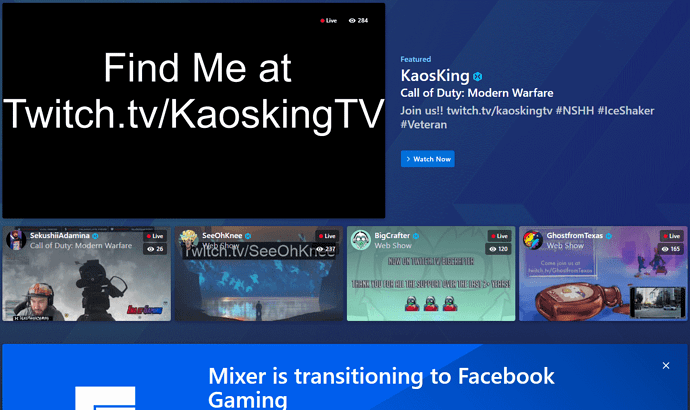 That sure didn’t take long.

It could have been funnier if somehow there had been zombies on the screen too.

I actually liked their platform, I thought it facilitated interaction between the streamer and viewers better without needing 3rd party programs.

Super surprised that a) they’re pushing people to stream on Facebook and b) Facebook has a game streaming platform.

Facebroke never found another platform’s best feature that it didn’t want to own (by buying or cloning.)

It used to be Microsoft we accused of “Embrace, Extend, Extinguish” but I think these days it’s FB that is the one doing it.

Mixer had some really great tech. The FTL streaming protocol is amazing tech that I don’t (from my experiences) Twitch can’t touch.

I thought Mixer was better than Twitch myself based on UI and tech. I mostly watch streams of people I know personally, but no one I knew used it. It was the Google+/Facebook thing all over again. The better platform lost because no one was using it. It pays to be the incumbent. Just some of my opinions.

I’ve always liked Mixer over Twich, it’s kinda sad that it’s going away. This was usually the way I watched twitlive