Came back to the office and my Mac was slow, unresponsive and wouldn’t launch apps. That’s because their servers are probably experiencing some heavy loads with all the BigSur Downloads. Turns out the oscp server that validates certificates when you launch apps was down and it made both my macs unusable. They say that disconnecting and reconnecting WIFI is supposed to solve the problem–and it did for about 5 minutes. Now it’s back to the crawl again. Going to try to reset my router. 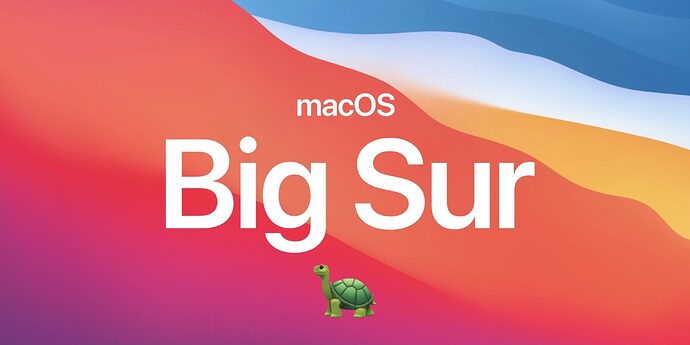 macOS Big Sur downloads are very slow as the next generation Mac software has just launched, at the same time, Apple's dev site appears to be down.

One of the reasons why I’m waiting to upgrade.

I have a Mac Mini I haven’t even powered on since July 2016. (It was purchased for iOS development which never happened.) I wanted to know the model to know if it could update to Big Sur–turns out it’s a Late 2012 model and cannot. I decided to upgrade it to Catalina, and that was slow as molasses as well. I guess Apple never really expected someone to have a Mac off for 4 years, because it was not easy to even figure out how to get it to update from El Capitan. Did eventually get there though, like 4 hours later… took so long it interfered with supper (it was occupying the table) so I never even got logged into the new version to check it out. Anyway, I gather the “data suck” for the new version was pretty huge…

The official issue is now agreed to be: Apple’s backend collapsed from demand for Big Sur. The ‘OSCP’ server which checks if an app’s developer cert is revoked died too, so apps got stuck waiting for a response that never came. It’s still telling me it will take 6 days to download Big Sur. Kinda the same feeling you get when you want that new Apple product next week, but have to wait 3 because you just didn’t buy it fast enough.

Think I will wait as well.

I just spent time on Adobe’s site and they’re pretty skittish about Big Sur. Not even talking about the M1 stuff, they make it pretty clear that Acrobat and Animate just won’t work. That makes it pretty tough for me to install it on my production machine, being in Marketing. I create PDFs every day. I’ve installed it on my old 2014 Retina 5K iMac and will test stuff there. My client and other production files stay on the 2018 MB Pro. All of this sucks, too, because I just slayed out the cash for the 13" M1 MacBook Pro. Looks like that will just be a toy until sometime next year when Adobe gets their Apps together. You would think they would have been ready by now, but they’re only promising M1 compatibility with Photoshop next year. Who knows when the rest of the suite will come.

Acrobat and Animate just won’t work. That makes it pretty tough for me to install it on my production machine, being in Marketing. I create PDFs every day.

Same here, as far as Acrobat goes. I’m waiting, of course, but if I couldn’t, I guess I’d figure out alternatives… Multipage PDFs can be output from Illustrator using artboards or from InDesign, and Photoshop can make a raster file a PDF…

You would think they would have been ready by now, but they’re only promising M1 compatibility with Photoshop next year. Who knows when the rest of the suite will come.

Their codebase for their tools goes back to the early 90s. It isn’t just a matter of recompiling for the new OS version or the new processor, they have to do a lot of work to get things compatible. There are great swathes of assembler, as far as I am aware. For the M1, that will need to be completely re-written.

Microsoft had the same problem with Office on the Intel Macs. It took them several years, before they could bring out an Intel native version. Most Excel functions, for example, were written directly in PowerPC assembler and needed to be re-written completely to run on Intel processors.

If you wrote the application in the last 5 years using Swift or Objective C, there is a good chance you can quickly convert to Big Sur and M1. If your application goes back to the dawn of the Mac, as a lot of the big suites do, you have a lot more work to do, because a lot of code will not be in Objective C, let alone Swift. That means a lot of laborious work to get it converted - man years of work.

Luminar not compatible yet (on Intel), and I always keep my wife’s Air a version behind as she relies on her music production software. Only just upgraded that to Catalina.

Interesting that the Luminar bugs seem to be around the discrete graphics and hardware acceleration. It works if you turn that off.

Thanks for the explanation. That’s why I probably should have waited on my M1 MacBook Pro, but I’m an early adopter and they claim the suite will run OK under Rosetta2. I’m going to keep my production on Catalina on the 2018, and use the M1 to test as Adobe releases updates.

If Rosetta 2 is anything like the original Rosetta during the PowerPC to Intel shift, there shouldn’t be any dramatic problems. Applications may be a little sluggish at times (especially the first time they are run, where they are converted to ARM code, thereafter they should run native, according to Apple), but unless they break a lot of Apple’s API rules, they should run fine.

PDFPen is a great tool – multi-platform family of tools – for managing PDFs. I recently got it for the iPad and would get their Mac version if I had serious work to do. Smile Software is a great little shop.

This may be an opportunity for cutting over to non-Adobe tools, or maybe your employer mandates particular software. I don’t have any particular recommendations, but I’m sure there are some excellent indie and small company titles. Microsoft and Adobe appear unable to do timely updates to new platforms; it took Microsoft over 6 months to add new trackpad support for Office on the iPad.

Could this be the actual cause of the problem?

Yes that was the cause of some of it for sure. (The network being slow was causing other issues no doubt.) It strikes me that Apple has designed this system to be a little too aggressive. It should audit an app on installation, and audit installed apps on a regular basis, and NOT audit every launch.