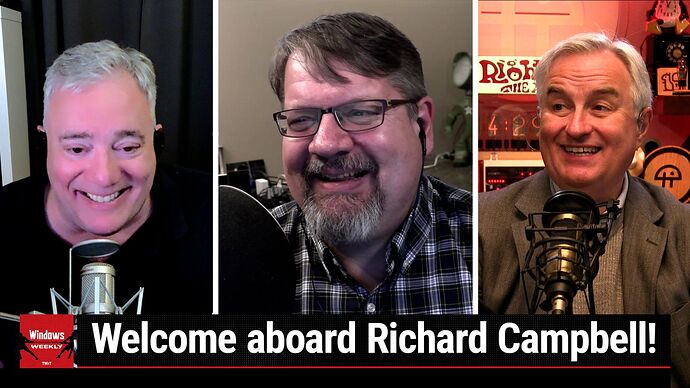 The Angle of the Dangle | TWiT.TV

Welcome to the Windows Weekly family, Richard! Happy to have you here!

You all jest, but I’m def gonna try and get those Xbox Oreos

Glad to have you onboard Richard, look forward to many episodes with you!

I wanted to point out that the “Premier Field Engineer’s” that Richard said aren’t really around any more is not correct. In fact the group is probably larger than it’s ever been. The role is identical to PFE’s but their position has been renamed to Cloud Solution Architect - Engineers. They support Premier and Unified Support customers.

A pretty arrogant comment by Paul that the Windows 8 user should just buy a new computer. Reminds me of Apple Cook’s comment that the questioner should “just buy an iPhone”. Not a good attitude. Nor was the making fun of older users.

A user with a good working Windows 8 computer can easily upgrade to Windows 10 for a few more years of service. Microsoft will likely extend support from it’s currently scheduled support end date of two years out. Also, Windows 10 will continue to work after support ends.

Better yet, the Windows 8 user could install Linux. I did exactly this years ago when Windows 8 come out. Libre office smoothly replaced MS Office, plus I’ve had a 100% trouble free system since then. No more Microsoft update “Russian roulette”.

Finally, should the casual user decide to update, a Chrome-book would be a better choice. I’ve recommended this to several casual users and found them very satisfied with a trouble-free system.

I’m an older user who used PCs and Microsoft products long before Paul. My years in the computer industry included participating in several meetings with Bill Gates and Steve Balmer.

Perhaps installing Linux is an option for the enthusiasts that listen to Windows Weekly, however it’s not an option for more typical or less knowledgeable users. And Chromebooks have limitations as well. It really comes down to the annoyances you are willing to tolerate for the benefits you get. I myself have not had the ‘Russian roulette’ issues with Windows update that others seem to have had. I had a Windows 8.1 PC from 2014 that did an in-place upgrade to Windows 10 when it was released, and every subsequent update after that point until March 2020, when the motherboard died. Each upgrade was flawless - I had absolutely no issues. Obviously, my experience differs from yours, but it goes to show that our own perspectives sometimes need broadening, so we understand the larger context.

What you read as arrogance in Paul’s recommendation, I see as a practical necessity to stay current from a security and safety standpoint. But your experience differs from mine.

On a personal note - I’m a bit disappointed in the number of people who like to bash Windows. When you consider the variety and quantity of different hardware out there - it seems like a miracle that Windows runs as well as it does on all of it. I think we’ve become desensitized to the complexity of modern technology and have lost sight of the fact that Windows really works well on so many different devices. Of course, it’s not perfect, but I think it’s a lot better than many give it credit for.

Installing a mature Linux distro, such as Ubuntu, is easier and much quicker than installing windows. It’s also free and doesn’t demand that you create an account.

Many years ago, Linux was not easy for a novice. That has changed dramatically.

I’m not bashing windows, but it now has competition.

As for ‘security and safety’ buying a new computer is no more safe and secure that upgrading to windows 10 for the person mentioned.

I don’t like to bash Windows, but I find myself having to complain about how poorly MS is behaving. For example, recently, they did some update (nothing shows in my recent update list, they probably re-released an old update) that caused all my PCs and VMs to get a MS Edge icon back on my desktop. After deleting it a half-dozen times, they did another update and it came back. again! This just sucks of MS desperation… I am not, nor will I ever, using Edge… stop acting like a whining child and let it go.

This is just one example of the poor behaviour of Microsoft and how they’re forcing s__t into Windows that no one wants (Teams for Windows that is not compatible with Teams for Enterprise nor with Skype anyone?) Side panels and ad panels and ads in search and on and on. It’s fine to invent these features, put them in a “Windows Feature Pack” with a free Solitaire game and stick it in the MS Store and people will WILLINGLY install it and monetize themselves. For those of use who don’t use a PC like a Joe/Jane user, leave us the h__l alone.

Installing a mature Linux distro, such as Ubuntu, is easier and much quicker than installing windows. It’s also free and doesn’t demand that you create an account.

It depends, a new version of Windows is usually offered in Settings and is one click - unless the hardware is not compatible, otherwise you download the Media Creation Tool from Microsoft’s site and let it get on with it.

With Linux, you have to know what Linux is, for a start, and know which distribution you want to use. Then you have to download the ISO, create a bootable USB stick (something most users probably don’t know how do do) or create a bootable CD/DVD, here, they might have burning sofware, if the PC is old enough.

Most of the Windows users I deal with on a daily basis can’t use their everyday programs, if the icon on the desktop disappears. Go into the start menu to find the application? No chance, call support.

For enthusiasts, like most of the people here, switching to Linux wouldn’t be that much of a hurdle. For the average user, it is way too complicated.

a new version of Windows is usually offered in Settings

“or the average user, it is way too complicated” - nonsense. I have several friends and family members that run Linux, most who are not techies. The desktop, in Ubuntu for example, is no more difficult that Windows. Perhaps even simpler. Linux updates also never reset or override one’s settings.

My mother came to visit me in 2005, I lent her a laptop, she said that my “Windows” was much better than her Windows, it was SUSE. She ended up taking the laptop back with her. I only got Tetris scores out of her, instead of constant questions about why something didn’t work.

But, there is no way that she would have been able to re-install her PC with Linux. And, don’t forget, these users are buying PCs with Windows installed, so they don’t have to know how to install an operating system, they just turn it on, and when Microsoft offers them an upgrade, it gets installed automatically.

If they have a tame techie who can set up Linux for them, most probably would be fine, and in fact, probably have fewer problems than with Windows. But if they can’t find an application, when the icon disappears, how do you think they will install Linux?

Case in point, I have had 3 calls today, and 8 in total over the last week, because Microsoft changed the location of the icons in Outlook from the bottom to the left and the “Folders” icon disappeared behind the “Other Apps” icon and switched them from their standard Folder view to Mail, where shared folders aren’t shown. Every time, “Outlook has lost my shared folder favourites,” every time, 2 clicks later they were back.

Compare apples to apples. You assume that everyone starts with Windows already installed. I don’t see how it’s any easier to install Windows on a machine that is running something else, than it it to install Linux. In each case, one needs to obtain installation media. In each case, that can be downloaded to a USB or ordered on a USB or CD. Amazon https://www.amazon.com/bootable-linux-usb/s?k=bootable+linux+usb

New PCs can be bought with Linux. Dell sells machines with either Windows or Linux preinstalled.

If you buy a PC in a store, Windows is already installed, unless you go to a specialist site to buy it with Linux or nothing. With 7, 8 and 10, when the next version came out they pretty much pushed the next version on users through Windows update.

she said that my “Windows” was much better than her Windows, it was SUSE. She ended up taking the laptop back with her. I only got Tetris scores out of her, instead of constant questions about why something didn’t work.

That’s funny!! And she was right, her “Windows” was better