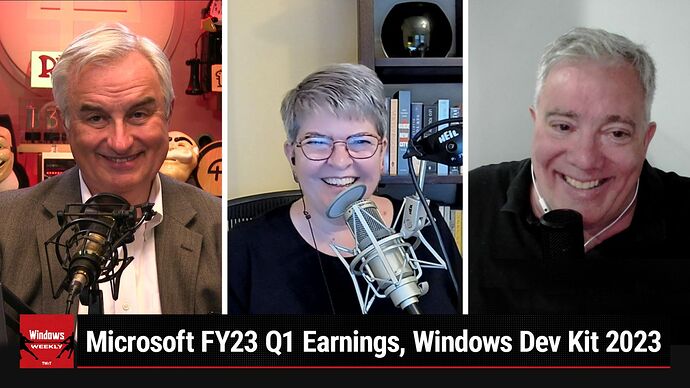 Best of luck Mary Jo!!! The Show will not be the same without you.

I have been listening to (and watching) Windows Weekly since 2009 and can now no longer remember the show without @MaryJo being a part of it. I mentioned this on @thurrott’s website, but it feels like a family member has left us.

Be well Mary Jo - and know that so many of us will miss your regular presence on the show. Best to you on this next endeavor.

Seconded! @MaryJo has been brilliant over so many years of WW, her attention to detail and focus being second to none. I have no doubt that she’ll excel in her new job but she leaves an enormous hole at TWiT.

I can only agree with your comments. I concur without reservation. It was me who suggested on the Live chat that Mary Jo seemed board, three weeks ago. It was an attempt at humour (feeble at that). I totally missed its significance. In reality Leo would have known the circumstances but in his professional way kept Stum. I came to Windows weekly via Security Now just before Mary Jo joined WW. Her replacement does need her knowledge & perspective and attention to detail - A tough one to follow for Leo & Paul. I sincerely hope the podcast does continue. TWIT does have a unique value especially via the live chat forum - even if it racks Leo off occasionally.

Started watching Windows Weekly early during the Windows 8 era and can’t remember a time without Mary Jo. She’s been a pillar of the show whose enterprise focus added an unique career advice element to the show, which has no doubt touched the careers of many listeners over the years.

Thanks for countless hours of infotainment. Cheers to Mary Jo

Back to the old days with just Leo and Paul

I’ll miss Mary Jo and her coverage of Microsoft’s enterprise business. Enterprise is really the future of Microsoft. I hope that This Week in Enterprise Tech will pick up the subject.

Consumer interest has peaked and is beginning a downward slide. Windows interest to the consumer is declining, with the shift to the phone as a computing device.

Windows Weekly has lost it’s purpose. Talk about gaming is about all that’s left and should be moved to a show named for, and focused on gaming.

Microsoft as a business and its future direction is of interest to some. Perhaps rename Windows Weekly to reflect that.

“Windows” news and progress seems stagnant and no longer deserving of a show. Paul’s knowledge would be best used in a gaming or Microsoft business show, rather than just complaining about trivial things in Windows 11.

I miss Mary Jo as well, but I was never interested in the enterprise side of Windows, beyond the fact that the consumers got the scraps after the enterprise customers were served. I more miss the times when MS cared about the consumer versions of Windows more than just as an advertising funnel. It is unfortunate that Windows for consumers is no longer of much interest and so there is less and less to talk about it. I’m sure it can be a struggle for Paul to come up with content for the show. There is, however, a large base of users who use Steam and Epic gaming platforms and who buy PCs instead of consoles to game on. This probably accounts for some of the interest in gaming on Windows that gets covered in the show.