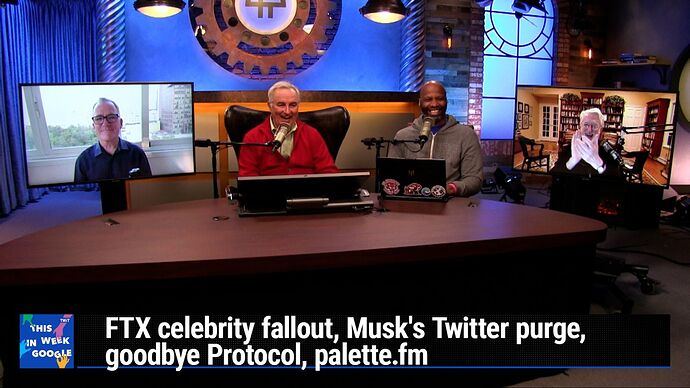 Ant freaked out hearing Pat Boone’s recording of Tuttie Fruity. I remember in the fifty’s when it was being played on radio. I for sure thought he was black

An interesting discussion on the role and liability of advertisers in the FTX debacle. One might say that it does seem unreasonable to expect advertisers’ agents to be able to do sufficient DD on a firm that was able to hoodwink even the most sophisticated of investors along with most of the industry.

But we circle back why are these celebrity advertisers not required to treat these endorsements as financial or gambling products with the usual “investments can go up as well as down” and “you could lose your entire investment” featured prominently, just as @Leo has to do when he has financial sector sponsors (not to mention the declaration of conflicts of interest and all that good stuff).

The thing the episode didn’t touch on was the enormous number of influencers who were shilling FTX, in many cases without any reference to the fact that they were being paid or that their whole channels were essentially just ads for FTX pretending to be content.

I’ve watched around ten or so “apology” videos now where influencers and content creators are trying to distance themselves from it all with some even turning on the water works for impact but none offering anything I would class as a genuine mea culpa. The one or two that come closest do admit the payments were substantial in cases more than 10x their other brand deals and often involved large grants of various tokens.

None have offered to return the payments, donate to a victim fund, or give them to their audiences as reparations. I’m being slightly facetious – I know this is too much to ask – but that’s what a true apology would look like in my opinion…

On a brighter note an overall great episode and @Leo I hope the Pizza tasted ok after being warmed up on a heatsink!!

And I am so glad we’ve turned down all crypto and nft advertisers.

That sounded so bad. Maaaaan. But, that was typical behavior back then. Thx for listening to the show

A contract entered into under duress by physical compulsion is void. Also, if a party’s manifestation of assent to a contract is induced by an improper threat by the other party that leaves the victim no reasonable alternative, the contract is voidable by the victim. Restatement, Second, Contracts No.No. 174, 175.

SBF is nothing but a thief and con man. That’s what caused FTX to fail. Reed Albergotti and Louise Matsakis are doing some good reporting on this in SEMAFOR.

The first groups that should be returning money are the political parties and charities SBF donated to using stolen funds. This will probably happen in bankruptcy; the court will “claw” the funds back. Just with Bernie Madoff.

I think we are talking about the FTC and Twitter here, this wasn’t a contract, this was punishment and remedial action, a penalty, duress is irrelevant in such a situation.

It’s not as if the FTC threatened to break Twitter’s legs. A consent decree is not “under duress.”

I was just trying to help with some context of the term “duress” as it applies to contract law. The panel seemed to imply duress never comes into play with contracts. (“Just look at plea agreements. Aren’t they all made under duress?”)

Was duress involved in Elon’s case? Doubt it. Should you blame someone for at least attempting to use a legal defense?

No, I’m not a lawyer, but I did take a year of Business Law in college.

I really liked Phil Libin being on the show, please let’s have more of him in the future! I appreciated his view of issues (such as Twitter) without “hair on fire” feeling (also didn’t seem to have biased views). Seemed very educated & positive outlook on many issues.

I agree, Phil was a great guest and has lots of valuable knowledge to impart