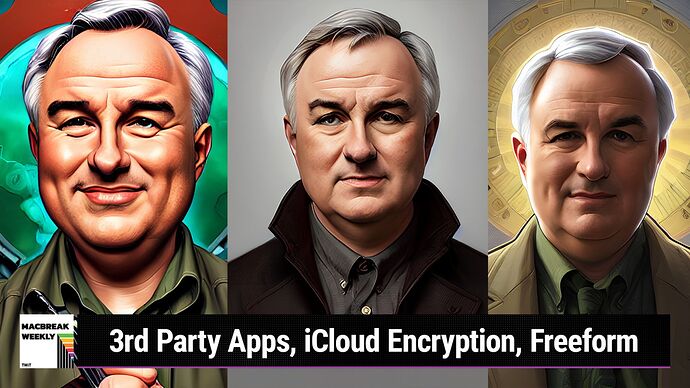 Did it seem that Leo was particularly mad at or hating on Apple a lot this week? Not a good look for a show called Mac Break Weekly. Just my opinion

If you expect to only hear positive news that supports your world view, you should probably not be subscribing to TWiT podcasts. @Leo seems to pride himself on not being anyone’s yes man and frequently plays devil’s advocate for the sake of discussion.

I like that the show (MBW) tries to address all aspects of any issue and considers how it might impact users. The co-hosts can take totally opposite sides and have an honest discussion. In fact, the back and forth can lead to a more complete understanding of issues!

Can we please stop labeling having a dissenting opinion on something as ‘hating’? That alone might improve conversation and discourse between people.

That Android setting for ‘Install known apps’ works pretty well @Leo IME. You rarely have to find the setting. It works like other permissions, the first time you need it, it asks if you want to grant the permission to the app that you are using to open the APK.

I do go back in there and turn the permission off again though.

Good it’s at the app level now too rather than system-wide.

One thing I wish would be talked about that’s never included with the “3rd party app store” debate is this - “What percentage of iOS users do you think will enable this feature?”

I’m willing to bet that we’re all rambling on and on about something that will never see above 5% usage.

I think most probably don’t want another store, they just object to Apple taking 30%. If Apple drop it to a more reasonable level, they will probably find that hardly anyone uses alternate stores, but we might need the alternate stores in order to give Apple a push to being fairer to users and developers, as opposed to just short term investors.

Yeah it’s like Andy said. Things that Apple couldn’t do will suddenly, almost like magic, become possible once there’s actual competition and not just the “go use Android” duopoly.

And in the same vein, Apple should look into why so many developers of Mac apps are avoiding delivery through the app store, or offering 2 different versions of the same app both within and without.

Epic Microsoft and Amazon to open their app stores inside Apple’s. I have to agree with Alex this is not a win for the little guy. A big win for the Behemoths. Andy and Leo singing was definitely something to behold great show