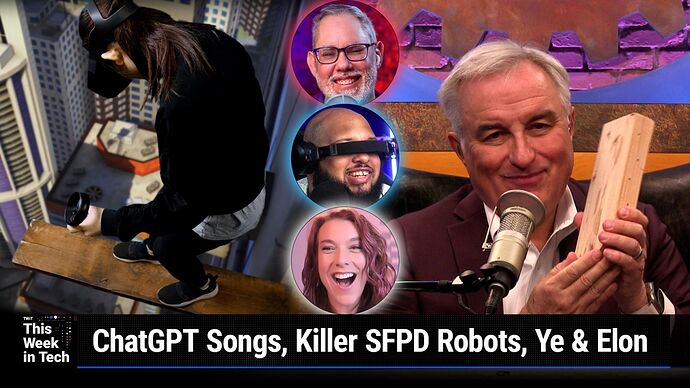 Great show this week. So many great talking points and rational discussion.

I agree that Apple is walking a very fine line with China, it has to do what the Chinese government wants, if it wants to continue business (manufacturing and sales) in China. I think negotiating those changes to their products down to a level that is even remotely acceptable from a western perspective must be a very difficult job.

It is also difficult to condemn or praise Apple about their actions, without knowing fully, what was going on in the background. Did the Chinese want the names and numbers of all the people sending propaganda and coordinating protests and this was what Apple managed to get it down to, or was the blocking of the send to all on AirDrop the only goal? For the CCP, I’d think they would want a lot more than just the blocking of AirDrop, but we don’t know what, if any discussions went on in the background.

The AI discussion was great as well.

As to the Activision takeover, I’m with the guests on the monopolies and mergers just being nodded through in the last few decades, with the laws being ignored or changed to enable big business to get away with “murder” (of the corporate variety).

Why do we need these few big companies? Why does Microsoft need to be bigger to compete and why do these companies need to buy up all the smaller companies? Surely it is a more fruitful and engaging environment, when we have dozens of software houses producing games, not just 2 or 3 big ones? This applies in general to most products these days. Even if there are lots of products on the market, whether it be white goods, electronics, food, a lot of those different “brands” are all just another part of the same conglomerate, there is no real choice out there.

I do worry that the game dev world has become a lot like the grocery store world. You have a few behemoths (Amazon, Walmart, and then the grocery store conglomerates that are local to each country, like, say, Aldi or Loblaws or ?Frys?) and then you have the occasional indie trying to scrabble into a low margin business. If the governments don’t stop all the buyouts and mergers, eventually in either market (grocery or game dev) there will be basically one or two gatekeepers and little else. This will allow the prices to get way out of hand, already the “best” (Deluxe, Ultimate, whatever) versions of games are getting significantly close to $100US.

I no longer buy any game on day 1, just no money for that, for a game I can’t even trial to know if I will really enjoy it. I end up waiting until a sale (like a year+ on) when the prices get below $20 for the game.

As far as I know, Aldi is not just local to Germany, they have spread out around the globe, they are certainly available in the UK and other parts of Europe, as well as the USA - in total, they have over 10,000 stores in 20 countries.

On the other hand, I only know Walmart through US films and podcasts like TWiT, although, didn’t they buy Asda in the UK?

Actually, that got me to do some research, wow, did they screw up big time in Germany. They came to the market in 1998, trying to push on the Germans the American style “friendly” manner - greeters at the entrance to the store and a general gathering of all staff every day. This went down like a lead balloon, customers felt harassed by the staff, when they got to the store and the staff themselves found the gatherings strange and uncomfortable.

In 2000, they planned to open 50 new stores, this was pie in the sky and the CEO resigned, when he couldn’t achieve his goals of shaking up the German market. His successor managed to open 6 of the 20 planned for that year.

They ended up in front of the courts in 2004. They had losses running into the hundreds of millions, with a turnover of under 3 milliard dollars (3 short scale billion). They were also accused of blackmailing methods on staff, when they refused to switch to more flexible working hours, even saying they would close a whole store, if people working there didn’t switch to the new plan.

They also lost at court, when they tried to push through a zero tolerance policy for couples working together in the same store. The courts told them that this policy was illegal in Germany and could not be enforced.

In 2005, Walmart in Germany only avoided forced bankruptcy (i.e. they had reached the legal definition of bankruptcy and carrying on trading would have been illegal) by the mothership in Arkansas guaranteeing the debts. In 2005, they closed their South Korean stores and left the country. This set a precedent and in 2006, the German business followed the South Korean’s lead and sold the remaining stores for a pittance to Metro AG.

To put it in balance, I believe Lidl and Aldi have encountered similar problems the other way round, at least in the beginning, when they tried moving into Asia.

Aldi is not just local to Germany

Not an expert to be sure, but I thought Aldi US was separate company/unit. I presumed they’d do that in every country, for good measure. Still, as big as they are, they’re much more regional than Amazon or Walmart… for now.

Aldi is family run and have expanded worldwide. It is normal for there to be subsidiaries in each country where operations take place - even Amazon, Microsoft, Google etc. do this, they have to do it for tax and legal reasons. In the EU, it is a bit easier, they only need a subsidiary in one country, not in each county they do business in, although Microsoft has several, such as Microsoft Ireland, Microsoft Germany etc. because they have offices in each country.

I listen to the show every day on the drive to work, so I just finished this show this morning. I am hoping we get to dicuss the following Twitter news next week.

"“Think about visibility filtering as being a way for us to suppress what people see to different levels. It’s a very powerful tool,” a senior Twitter employee told Weiss.

I was going to link to the story, but it appears you’ve blocked that web site. Must be a mistake.

going to link to the story

The forums give different levels to users based on their experience here (amount of posts, likes, complaints, time spent in the past 6 months, and other criteria.) My guess what happened is that, based on your criteria, you’re not yet promoted to the necessary level to make the kind of post you wanted make (with a specific link.) In particular, your account may yet be too new.

You used to be able to see what you needed to do/have to advance to the next level (say from Basic User to Member) in your account info. I can no longer find that for myself, so I don’t know if that feature has been removed or disabled, or if I can’t see it anymore because it no longer applies to me. Click on your avatar icon, and peek around to see if you can learn what you need to do to get promoted to Member.