I have been on COX cable high-speed internet for 20 years and the infrastructure and quality of COX internet is EXTREMELY poor in my neighborhood. So I made a call to ATT to get att fiber internet installed in my home.

Now in the past when I inquired about ATT internet you would have to ask if you address would have actual “fiber” or you would be under the old “Twisted pair” DSL. When I talked to the rep they assured me this is a new infrastructure Fiber. So having said that, I have some questions for some existing ATT Fiber customers.

Do you have to rent your modem?

Is the modem configurable to work with open ports for like a plex server? Or do you use an additional router?

How does the internet come inside the home? Into an existing coaxial cable outlet or new wall port, if so what kind?

Any other advice or recommendations you have for a new ATT fiber user?

Can’t answer for AT&T, but assuming Verizon is similar, they have a box they hardwire fiber to in your house, then its Coax or ethernet to their router.

I happen to be one of the people that can help answer these questions. I switched from Cox to ATT Fiber about a year ago here in Arkansas.

Q1: Yes, and no on the Modem. It is provided by ATT, and we HAVE to use it to have the service. However, there is no rental fee.

Q2: If you want to configure your modem and router like a pro, you are gonna have to connect one to it. ATT locks down a lot of the settings in it.

Q3: The installer ran the fiber from the pole outside to my attic, and from the attic down conduit to the mounted box in my dinning room. Then the Modem/Router is connected to that box.

Q4: If your service with Cox was anything like mine, then ATT Fiber will be a Godsend. In the entire year+ I have had the service, we only ever had issues one time and it was because a squirrel chewed the line. Not much you can do about that. My service went down WEEKLY when I had Cox.

I hope this helps.

Thank you both for the responses so far…

tekdrudge. ATT here in the southwest is charging me $10 rental for the modem. I don’t mind using their own equipment but I do not like the fact that I am being charged an ongoing rental fee for the life of being their customer. Why not just hide it in the cost of service instead of driving me “fee” crazy.

On that not about locking down the modem… Is thier an option for “guest” network?

And of course, you can change the password to the wifi to a personal one?

I know that idea may be a bane to people who offer inet tech support over the phone but its better than someone walking up to the modem and taking a picture of the password to get on your network.

Thank you again for the discussion

Yes, there is a guest network option. I don’t use it, but it’s available. And yes you can change the default wifi password, however I had issues with the password being reset to default anytime I rebooted the router. Not sure if that is a firmware bug or a “security feature”.

I switched from Cox to ATT fiber as well about 8 months ago. I also do not get charged a rental fee for the modem. I have found most things in the modem are pretty configurable as long as its not DNS related, they do lock that down because of their TV service using a particular DNS or so I have heard. I only have internet so I can’t comment on the TV part. The only issue I seemed to have but may be just an issue for me was that I had to add my own mesh WIFI as theirs did not extend far enough for what I needed and it seemed to be dropping out but I think that had more to do with all of my IOT devices then just a common problem.
Other then that I have not had any real issue. The install was fiber to the back of the house ran down the side and through the wall then terminated into a conversion box that converts it to ethernet which attaches to the modem.

a squirrel chewed the line

That mounted box in your dining room - does ATT call that an ONT? Do you know what model it is? Just curious the similarities/differences between ATT and Verizon’s deployments.

I know you didn’t ask me but figured I would answer anyways.
Yes the box at the end of the fiber is a Optical Network Terminal or ONT. 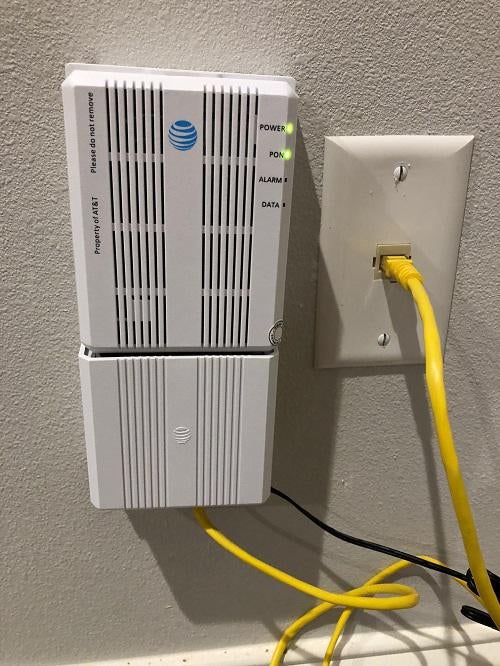 This is what I have.

So from what I am understanding it that the ATT install will in no way use the existing cable wall infrastructure. So if by some odd chance I would want to go back to cox cable it would be plug in the modem into a cable outlet and a COX soft switch on?

Yes that is the way it is supposed to work. The only thing I would say on that is to pay attention when the tech is installing the fiber because some tech get a little over zealous and cut the coax coming to the house to “make room” for their install. In reality they are just trying to remove the competition.
I say this because I walked out as the tech was going to cut my coax and I stopped him.

When I switched from Comcast to AT&T some time ago, it was a whole new infrastructure for installation. All I was getting from Comcast at that point was internet and phone anyways, but the AT&T installer ran the fiber down from a splice in the fiber between the poles, down the length of my house, and drilled a hole through the wall to bring it in to the ONT. Didn’t touch the Comcast stuff, it was working when he came and after he was done.

I had an eero wireless mesh router at that time, so put the BGW210 into IP Passthrough mode, turned off its wireless radios, and used the eero in full router/mesh mode. At this point I’m using an Asus RT-AX88U wireless-ax router, same thing, BGW210 in IP Passthrough mode. Works really well, getting about 930/930 at the Asus router for wired connections, almost as good as it gets.

I’ve given some thought to bypassing the BGW210, but for the extra 10Mbps I’d get out of it, just not worth it to me to put in the time and then have to maintain the resulting infrastructure. Things are simple now, we have way more internet than we’ll need in the foreseeable future. Very reliable and robust, which I could say the same for AT&T :-).