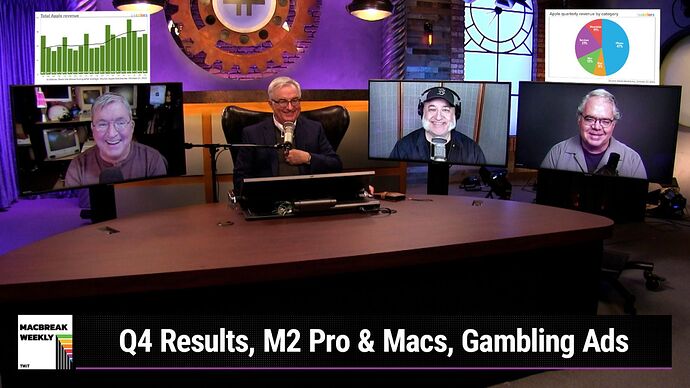 I think I’m in love with Alex’s pick: Moises. So very cool. I loaded it onto my iPad and my Mac. I’ve processed several songs and it works surprisingly well. Thanks for this wonderful pick. Long time fan. First time caller.

You only spoke a few minutes about the Amazon Prime Music story, because it probably does not affect many people. I am one of those disappointed with the change. Andy Ihnatko’s comment about entitled people wanting music for free doesn’t apply here because Prime Music was sold as a feature of Amazon Prime just as well as Prime Video and Prime Games. What if Prime Video suddenly said you can no longer watch movies on demand and you can only watch Live TV style (like Tubi) until you pay for some kind of Video Unlimited upgrade. You would suddenly realize that you are not getting what you thought you were already paying for.

I don’t order products often enough to make my Prime subscription worthwhile, so the sooner I cancel Prime, the better. Even though it FELT nice to know that I can order things with free shipping, I am realizing that I use Prime Music the most, so I feel like a fool for paying about $14 for a music service that is not as good as Amazon Music Unlimited for about $10 per month. Neither of which are “free.”

As a financially challenged church musician, I try to find places where I can save money, including cancelling subscriptions. I used to use Prime Music for practicing songs with the band. I have made shared playlists for our song library and for special events and for practice sessions. For those songs that were not included on Prime Music, I just pay a dollar and a half to buy the song. From now on, since we do not learn new songs every month, it makes more sense to just buy the tracks that we sing rather than subscribe to Music Unlimited. Once I am caught up, it will be much cheaper than a subscription. Even if we learn a new song as often as every two months, that would still be less than $1 per month compared to $10 per month. Other band members who have access to the public playlists may or may not be using Music Unlimited. It is their choice, but most people already have Amazon Prime.

Now that I cannot use Prime Music to play songs on demand, I am more inspired to cancel Prime and just purchase all the music I need. The worst-case scenario is that by chance every song we sing for a month is not in my purchased music, I might pay about $20 that month, but we repeat songs so often so I am very confident that I will not spend more than $5 per month until I purchase all the songs in our song library. Once I own all the songs that we know how to sing, I will just have to pay a few dollars when it is time to learn a new song.

Comment for Andy. In the discussion concerning what to do with music from artists who say awful things you compared Kanye West’s antisemitic attitudes to those of a nineteenth century classical composer. While I agree that in the fullness of time we can enjoy the artistry of reprehensible people, your comment also gives cover to Kanye. I think we have the right to expect some humanitarian progress to have been made in the last 150 years or so. What we might justify as commonplace back then should not be given the same pass now. Maybe better to contrast West to his contemporaries in this regard. I know you didn’t intend to soft pedal his behavior, but it just struck me the wrong way somehow. Always enjoy your work.