So fellow nerds. Been a long time listener of the TWIT network. My mother recently gave me an old computer. It’s very slow running Windows 10 (Older Machine) I already have a Windows Machine and a Mac so I don’t really need it and don’t care if I brick it. What would be a good distro to try for a first time Linux user. Any killer software I need to check out when I do download it? I’ve posted a screenshot of the about page from Windows to give you an idea of what I’m working with and how dated it is. 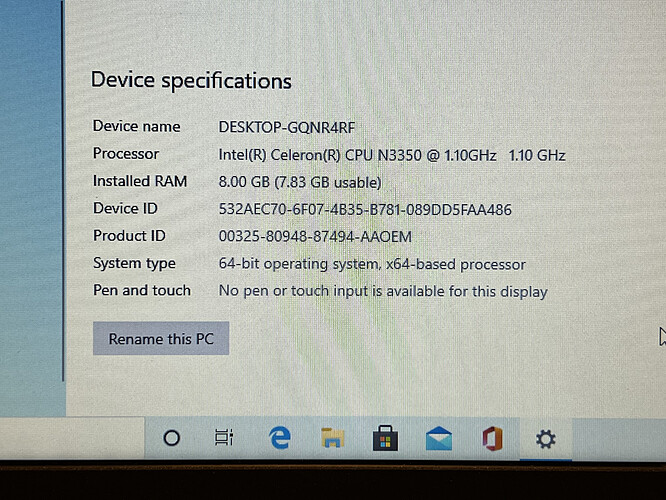 Well in many respects the core of Linux is identical between all distributions. What changes is the included (i.e. preinstalled) apps/software and the user interface. These are very personal elements that can be hard to recommend. If you like Windows or Mac OS particularly, there are distros that feel more like either of them. (Mint and Elementary for example.)

For a just off-hand recommendation, I think I might suggest you try Zorin OS because it’s kind of an “attempt to please anyone” sort of OS. Be aware that it’s not fully free if you fall in love, but to experiment it should be sufficient.

The computer you’ve been given is very weak. It was the bottom of the range processor about 7 years ago (introduced 2016) and, at 1.1Ghz, it isn’t really a workhorse.

Linux will run fine, but you will probably be better off looking at one of the lighter desktop managers, like Xfce - Mint has an Xfce option, as does Ubuntu, which is its the base for Mint.

The other, “main” desktops, like Mate, Gnome and KDE are more modern looking and have more features, but they are also much more heavy weight. They need more horsepower to provide a smooth, usable experience.

Whilst Gnome or KDE will install on the PC, the experience will probably feel more laggy than if you use one of the lightweight UIs. The UI defines how the desktop, menus etc. are displayed, they don’t affect which software you can use, the application will automatically install any libraries they need when they are installed.

The advantage of Mint is that it includes the repositories for proprietary drivers (strang wi-fi, original nVidia drivers etc.), so will save some faffing around, if the hardware is out of the ordinary or you need hardware acceleration. It also includes most of the multimedia drivers, like ffmpeg for video playback in web browsers. That makes it a reasonable starting point.

I moved to linux for my daily driver about 6 months ago. I went with Fedora and I’d recommend it to almost anyone. A default install gets you almost all the way there.

Be careful with accessories though. I recently bought a dock where the display ports don’t work in Fedora. Apparently it would if I download, compile, and install drivers, then kernel mod, but I’m not at all interested in that and I’d bet your mother wont be either. Ubuntu the drivers were two clicks away and entirely pain free.

There’s heaps of distros around but I’d recommend a live boot USB of Fedora and kUbuntu and see which works the best. They’re the mainstream ones so you’ll be better supported there.

Lots of good recommendations in here. I’d like to add another idea: the Celeron in that machine is roughly equivalent to the CPU in the latest Raspberry Pi 4 (no offence intended, just noticed it). Now, the Raspberry Foundation has developed a linux distribution that runs well on exactly that kind of hardware in terms of performance level. It is at home on ARM-based chips (so not x86-based, what you have), but there’s also a variant for x86-based chips. You can find that variant of the Raspberry Pi Desktop here: Raspberry Pi Desktop for PC and Mac – Raspberry Pi

Now linux is a greatly useful and friendly universe, but it, too, cannot do magic. It will not turn the Celeron into anything remotely fast without cutting many corners in terms of bells and whistles in the visual appeal of the operating system. But if you are ok with that, Raspberry Pi Desktop is a) actively developed, b) has a great community and much attention, c) focuses on exactly that part of the performance spectrum, d) has good documentation, e) is good with established hardware, f) is stable and g) will set you up to learn a type of linux that is widely in use (debian based, see below) so you don’t learn anything you cannot use anywhere else.

Killer software: hmm. From my experience, everything is a killer software that does not make me want to go back to Windows. On linux, thats about 95% of the existing software, the rest are games that do not yet run too well. LibreOffice is impressive in terms of an office package, however few people will call an office suite something all to exicting. To me, it’s truly the epitome of independence to have a work software that does not make me miss Windows and Microsoft Office (most of the time).

Then, the “killer software” might be linux itself. There is so much to explore and tinker with, to find, deal with, and fix on your machine. While Windows might feel like a modern car (runs reasonably well if the factory does not bork it with an update, but everything is locked down and you are being spoon-fed corporate policy), Linux is more of a kit car (you configure it yourself, you can do everything, it works well if you are willing to learn how to handle it). So I’d say: linux itself is the killer app.

The good thing about Raspberry Pi Desktop is that it’s Debian-based. Debian is a very common distribution that about half of the other modern distributions has been spun off of. To learn how Debian works will enable you to understand to 50% how other linux distros works and 95% how other debian-based linux distros work. That’s useful. You might want to explore a bit in future and getting you started with something too esoteric might require you to learn over an over. Generally, Debian will not be your first pick for the latest hardware - it is relatively slow to update but tends to be rock solid - but for old silicone, chances are that you will fare very well.

Welcome to … I am not going to say “the light side”, but “another good side” of computing!

I will disagree with some of the recommendations here. Yes the CPU is a bit weak, but with 8GB of RAM most desktop managers will work fine as it is low RAM on low end machines that cause the slowdowns.
Gnome and KDE love RAM, but 8GB is more then enough and they should work well and give a usable desktop experience. The hard drive in that machine will be the biggest laggard.

I am partial to KDE, so think KDE Neon would work well. It is Ubuntu based, but tweaked by the KDE folks to highlight their desktop. https://neon.kde.org/

PopOS from the System76 folks has gotten lots of good press and they make that desktop OS for the computers they sell, and make it available for others as well. https://pop.system76.com/

While you have plenty of ram your CPU is pretty weak. Go light here ya go! Download MX-Linux from SourceForge.net use this to make the usb
Rufus - Create bootable USB drives the easy way

I was going to suggest a Raspberry Pi. There is such a huge community of users so help is at hand if you need help.

I have done a lot of distro hopping, seems kind of fun. My opinion is MInt or MX Linux, but you almost can’t go wrong. You can always try another before you get too much specific setups and apps…