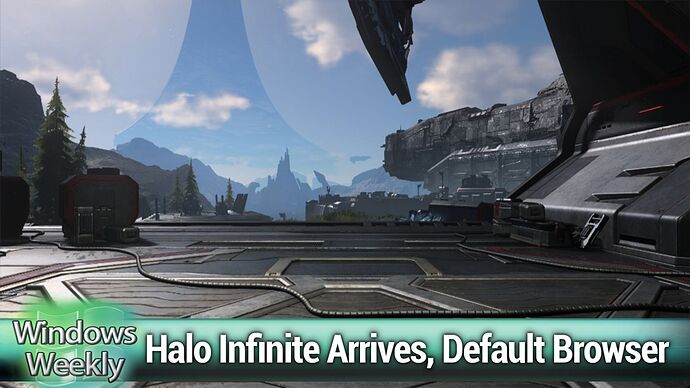 “Antitrust regulators can define a market however they wish” — No, Paul. They are governed by the rules passed by Congress and checked by the court system.

Mary Jo was right on, far more reasonable than Paul who was bringing up cases from 20 years ago.

There will not be any antitrust issue to this what so ever.

“Antitrust regulators can define a market however they wish” — No, Paul. They are governed by the rules passed by Congress and checked by the court system.

Despite how you might feel that the US is THE world, it’s not. He was referring to rules requested and applied by Europe (i.e. the browser ballot) that the US never had to deal with, but that affected Microsoft and their behaviour all the same.

ringing up cases from 20 years ago.

While I am not one for bringing up the distant pass at all (especially with Microsoft, who has seen 2 CEOs since then), in this case - the past is relevant in this case as it was the same behavior that got Microsoft in trouble in the past, regardless of what the circumstances are today.

Back in the good ole days, that would be what Microsoft would be doing.

Paul thinks every business decision designed to increase profits and market share is a antitrust issue, when the companies are fulfilling their shareholder responsibilities.

There are many innovative companies in Europe, but they aren’t always big multi-nationals. They start out small and use their local language, which makes it hard for them to break into the US market, for example, until they have grown.

One of the biggest differences though, is that Europe generally wants to have a proper business model for a new start-up. Investors want to know what they are getting into and how the business will earn its keep.

The US model of:

Doesn’t hold water in Europe. You have to define your usage model and how you will make money from the start. Also, new businesses have to be compliant with local laws.

Why should big tech stop doing business here? Why not just comply with the law?

Paul thinks every business decision designed to increase profits and market share is a antitrust issue, when the companies are fulfilling their shareholder responsibilities.

I will defend him here, no, he doesn’t. But he is a fan of Microsoft, in particular, but not a fanboy. That is a huge difference. When he sees a company, including Microsoft, doing something detrimental to their userbase, he calls them out on it. That is what any fan of a team, company or product will do.

If the company is “doing the right thing”, @thurrott is behind them 100%. If they make a misstep, he will call them out on it.

As to the second part of your statement. Fulfilling their shareholder responsibilities doesn’t (or shouldn’t) include breaking laws. The problem is, most laws were made at times when the average company was much smaller, so the fines are peanuts for modern global concerns. That means that most companies can ignore irritating laws, because the cost of the lawyers and the fines is minuscule compared to the money they are raking in or how much it would cost them to do things properly, legally.

GDPR and monopoly/market abuse investigations are about the only things that can really hurt these companies. This means that the companies get away with bad behavior for a long time, until the commissions finally have enough fuel to investigate them. Then they act all hard done by, when they are caught red handed.

Google and YouTube are a classic example. They knew from the start that they were acting illegally with copyright abuse, but they ignored the problem, until it became too expensive to ignore any longer - fines and court cases with lawyer fees exceeded the cost of actually doing something about it. But, by then, they were too big to actually implement a proper solution, so they have take-downs etc. which are all automatic and very hard to arbitrate. That means that some content creators have their content illegally flagged and removed/demonetized/the revenue goes to someone else illegally, and the content creator has to suffer lost income whilst they fight to get control of their content back.

There was a case just last week of 2 people having earned millions from illegally flagging and uploading content for which they claimed copyright, depriving the original artists of their income. Yet they conned YouTube and the rights society into believing that they had the rights to over 55,000 songs. They are now in court, but you can rest assured that the artists won’t get that revenue back.

Likewise, TWiT has to be careful not to get their content pulled - especially as a majority of it is time critical, by the time a dispute has been resolved, the content is irrelevant anyway, so it won’t earn much after the resolution of the dispute. Likewise, I remember @Leo talking about entities in South America claiming copyright on TWiT videos and either monetizing them or taking over the monetization.

The system is patently broken, but YouTube is now too big to implement a workable solution for a reasonable cost and too big for anyone to be able to force them into doing the right thing.

The same with online advertising. They are too big and get away with blatantly ignoring GDPR - data collection by advertising systems has to be opt-in, but I’ve never opted in to Google collecting my information, for example.

Android is another area, for Google, nobody can make AOSP devices, if they also want to sell full Google Android devices.

Microsoft, until about 18 months ago, seemed to have turned into one of the good guys over the last 2 decades. Now they seem to be slipping into their old ways again.

Hmm, as just one example, isn’t Spotify from some Nordic country… Sweden maybe?

I think our technology companies should stop doing business there for a few weeks and watch how fast they stop this nonsense.

If the US could just do us that favour for five or ten years, we would finally be having an incentive to get our innovation marketing game together and decrease the dependence on US services. It would be a dream come true for Europe. As it stands now, we are getting most of the services for free in exchange for serving as advertising cattle and easy intelligence access.

I’d be interested how many of these firms would retain their stance today if most of the world got fed up with bully tactics and banned and restricted those suppliers that are simply not acting as responsible corporate citizens in their markets - from paying taxes to facilitating competition. Markets and customers make brands. Take away the markets and customers and you’re left with regional shops.

However, all of this is slightly besides the point.

Consider the mission of EU regulators / commissioners / judges: calling out when firms are overreaching and stepping on consumer rights, stepping on the possibility for competition to arise, stepping on privacy, stepping on tax laws, etc. etc. They don’t have a mandate for anything more than that. The EU is so diverse that getting a mandate for anything more active is more or less impossible. For a moment, consider that these people are not there to “wage a war on” whoever (this narrative is simply not that established over here - we tend to wage wars on ourselves, thankyouverymuch) - they are predominantly there to identify and highlight overreaching that harms the development of markets, consumers, minorities, etc. It’s a conservationist stance, not an aggressive one. Even though it is often times reframed as an aggression since it’s easier to communicate and for audiences to swallow in our comic action hero entertainment culture of today.

When you hear EU people say or do something, consider for a moment how it can be in your own interest (even outside the EU, in good ol’ Murica). You even have someone to blame, for god’s sake.

I’m a pro-Microsoft guy and I definitely think some of the stuff they’ve done with Edge isn’t good from a consumer perspective. Without beating the dead horse, my issue has always been the lack of similar criticism for other companies doing the same thing - but many companies behaving badly doesn’t justify more doing it.

Paul’s criticisms are spot on here. And I really don’t care about where a company is founded - I care about how they behave. I don’t buy this “responsibility to drive profit at all costs” garbage. That’s a shareholder perspective and not a law. Poor behavior is poor behavior - regardless of the justification.

I care about how they behave. I don’t buy this “responsibility to drive profit at all costs” garbage.

Precisely. Only taking into consideration the quoted bit gets you pretty quickly to accepting organised crime. Minding behaviour gets you to corporate citizenship. True, its more difficult and nuanced, but that balance is what ought to be and in many cases is the standard. And there are plenty of good companies out there, run by good people. Turns out that most managers, people, are closer to trying to keep a sort-of-good conscious than to maximise shareholder value.

They were looking for people who ran Edge on their iPhone I’m one of them. I use Edge on my Mac, my PC and my Phone for syncing reasons. I use Outlook for my email both work and personal as well.