The M1 Ultra is a REALLY BIG chip

Wow is that bigger than I would have expected… SOCs are not usually that huge, I wonder if there is room to spare in there for cooling, or if it’s really full of silicon. 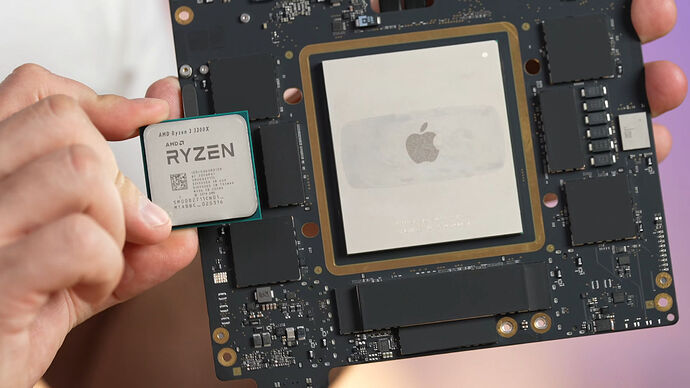 It is really full of silicon, which is why it has such big copper cooling blocks, which weigh a couple of pounds. You have 2 complete Max chips on there, 20 CPU cores, 64 GPU cores, the neural cores, video convertors, 128GB RAM, USB/Thunderbolt controllers & storage.

It has pretty much everything that would be on discrete chips on a normal PC - for a start, it has the equivalent of 5 of those Ryzen chips in the photo, plus graphic card, plus a neural card, plus the RAM DIMMs, plus the SSD… That is a lot of stuff to pack into one SoC.

I told you it was as big as a middle finger.

man i thought my threadripper was big, this thing is massive. although to be fair as @big_D pointed out there’s a bit more to it than just a CPU.