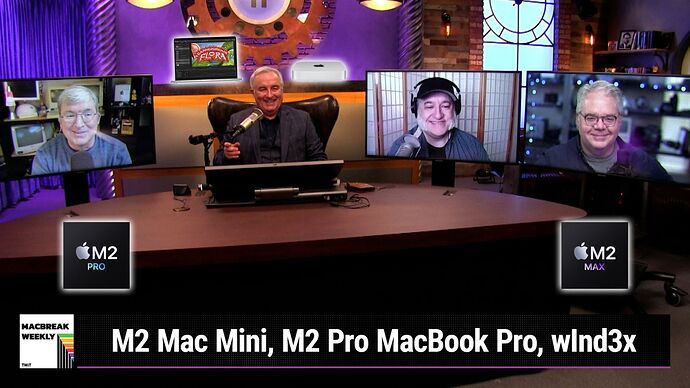 Brilliant start to the show.

Andy: I’ve lost my camera.
Leo: We’ll send you whatever camera you want.

As soon as @Leo said that, I knew what was coming next.

Andy: What does Alex recommend?
Leo: What should we send him Alex?
Alex: Arri LF (a camera costing $100K+)
Leo: NO!

I don’t think your new conference system is working as well as you had hoped for. Everyone continually talks over and interrupts each other.

The show was very interesting, though.

I freely admit to being an oddball in this but whole idea of supporting touchscreens in MacOS strikes me as a solution searching for a problem. It is a huge amount of work for the OS developers and the main example I heard was that you can scroll your computer windows like you do your phone or tablet. I have no big objection to the idea but I would hate for the non-touch UI to be compromised at all to enable touch support. I had a high end touch screen Windows laptop as my work device for years; the only time I ever used the touch screen was when my trackpad stopped working every few weeks and I had to use the touchscreen to shutdown apps before I rebooted my machine.

Reasonable people can disagree but it had no value to me.

And then on top of the surprise announcements, Apple brings back the HomePod. I guess save that for next week’s discussion eh? heh

I was seriously making plans to buy a refurbed Mac Studio from Apple on Monday: 32GB RAM and 1TB HD for $1979, minus the 3% Apple Card discount.

Then comes the surprise hardware announcement, followed by this podcast. The timing could not have been better. I’m seriously thinking about getting a Mac Mini Pro M2 with the same specs. The price is about the same. Andy made some really good points and kind of mirrored my thinking on what to buy.

I’m hesitating partly because the Mac Studio has more bells and whistles, but from what I can tell, it’s more video-oriented stuff, and I really don’t do that kind of stuff.

Thanks again for the great discussion. Much appreciated.

Those are good points. I’m wondering if it’s somewhere in-between. I find myself occasionally reaching out to touch my MacBook Pro screen and then thinking, “No, dummy, wrong device” LOL. Given how Apple is slowly transforming MacOS to resemble iOS, I think adding touch to a non-iOS device wouldn’t be as intrusive as you’d think.

That said, I also imagine there’s still a ton of standard institutional Apple dogma (even some residual “Steve didn’t want that” thinking, despite what management says otherwise) standing in the way of implementing it.

In the end, Apple will probably do it and wind up doing it better than most of the competition.

I have a Windows Laptop with a touch screen in addition to my Macbook. I don’t really often find myself reaching out and touching the screen of my Windows machine, but I’ve noticed a few times when the feature has shined. Working with Excel, when I’m proofing something I’ve written and want to go to the exact spot the moment I see it and not have to find out where my cursor is on the screen. And the one time I instinctively do it, is when I’m sorting mail. I believe this is because my Mail triage is usually done on my iPhone, but I see the button I want and I just tap it.

I’ve had laptops with touchscreens. Other than trying it out, I don’t think I ever used it.

I think ‘lost mouse pointer’ is the biggest use for a touchscreen. On a. On-touch machine, you waggle the mouse around, until you find it, with touch, I sometimes just tap the screen to relocate the pointer, so I can continue working.

There is exactly one excellent reason to add touch support to Mac OS…eventually allowing people to run Mac OS on M-equipped iPads and eventually even iPhones. I know there’s an argument that Apple would be cannibalizing their own sales, but I makes too much sense as the dream all-in-one personal computer to ignore forever. I don’t even think any of the OSes needs to change dramatically, Mac OS could just be an app that requires a keyboard and trackpad to really use, but has some basic touch functionality in a pinch.

Regarding Alex’s comment about people who only have Apple TVs and no other Apple devices - I’m one of those people. I received an Apple TV a few years ago as part of an HBOMax promotion with DirecTV, so we have that in the house. That is the only Apple device we have.

If I now have to have another Apple device in order to resolve something with Apple TV, then it’s not worth the effort to own it. I’ll just get an NVIDIA shield or something that has more functionality…

I don’t think your new conference system is working as well as you had hoped for. Everyone continually talks over and interrupts each other.

Leo addressed this in another thread to say it is not necessarily Zoom at fault. It is more to his style of conversation which is understandable since he is after all the lead host. Guess my point was, watching MBW, I seem to rarely hear Andy being interrupted or cut off before completely finishing his thought. On the other hand Alex will often get interrupted but will politely wait and follow up to finish his thought. A total 180 is when Jeff Jarvis is co-host. He often walks all over everyone including Leo. As pointed out in Leo’s post, this is the way they want to carry on so either enjoy the show or move on. The value in content for me is worth a bit of annoyance.

I’m one of those people

I willingly bought one of those $99 Apple TV 2nd generation (the mini ones that came out around 2015.) I thought I could play files off my network onto it. I could not, without joining the Apple walled garden. As I didn’t have an Apple account, and will never have one, it was basically a pointless piece of future electronics recycling. I did learn a lesson from that experience thou… never buy anything from Apple unless you’re going to start buying everything from Apple.